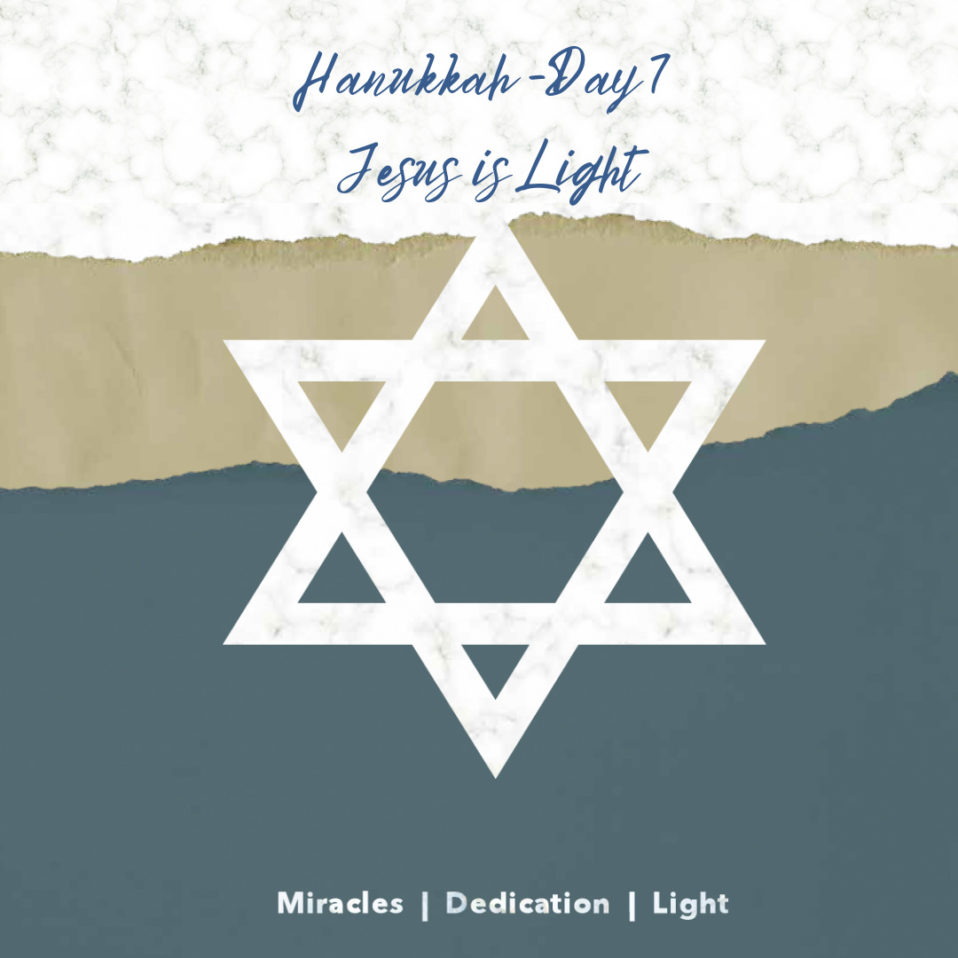 Hanukkah Day 7: The Menorah and Jesus as Light

The Story – The Menorah

Each night of Hanukkah, we light a Menorah, or a Hanukkiah. A Menorah with candles is lit each night to remind us that Jesus is the light of the world. As we light these candles and pray over them, we are reminded of God’s goodness to us.

Imagine standing in Jerusalem again, this time in the period of the Roman occupation, hundreds of years after the Maccabean revolt. Jesus is standing before a blind man. This man has been blind since his birth, and everyone in Jewish culture knows, if you are ailing from some terrible illness, you or your parents must have sinned! Most physical ailments were attributed to spiritual causes in the day of Jesus, and Jesus was well aware of this.

“Rabbi, who sinned, this man or his parents, that he was born blind?” his disciples asked curiously.

Jesus turned to his disciples: “Neither this man nor his parents sinned, but this happened so that the works of God might be displayed in him. While I am in the world, I am the light of the world.”

Jesus bent down, spit in the dirt and made a paste with the mud. He put the mud on the man’s eyes and sent him away to wash it off. The man walked away completely healed.

His entire world has been opened up because this man Jesus took the time to display the works of God in his life. His small life was important to the Savior of the Universe. Jesus had displayed his light to this man, and so today, Jesus displays his life to US! Even as we light the candles of the Menorah, we are reminded to look to Jesus as the light of the world.

THE THEME: JESUS AS LIGHT

Jesus was the creator of the Universe, the very one who created our world, us, and the LIGHT! Light is the beginning of all things: plants grow from light. We are warmed by light. The Sun, moon and stars shed light on us during the day and at night, for navigation, for sight… light permeates every crack and crevice of darkness everywhere it goes. It cannot be contained.

In Hanukkah, we see the element of light as a strong theme in the story, and we can compare the light of the candelabra in the Temple to Jesus, the light of the world. Jesus shines bright on behalf of his people, lighting their way, providing all they need, and sustaining them.

Today, we can remember that Hanukkah clearly points to Jesus, and as we light the candles on our Menorahs, we see Jesus in that very light. We believe in Jesus that much more as the light glistens in our eyes.

As we continue the Hanukkah story, ask yourself these questions:

Your ticket for the: Hanukkah Day 7: The Menorah and Jesus as Light

Hanukkah Day 7: The Menorah and Jesus as Light